Trust has Wind in Sails with Battens 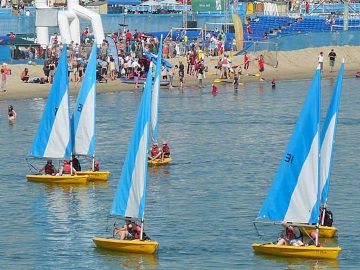 Battens has backed a charity which helps young people enjoy the thrill of sailing.

Battens Solicitors, through its charitable trust, has handed £200 of funding to The Chesil Sailing Trust (CST) - bringing its total donations to just under £1,000 in recent years.

The CST gives young, disabled or disadvantaged people the chance to experience the thrill of sailing and windsurfing on the 2012 Olympic waters off Weymouth and Portland.

It is based at Weymouth and Portland National Sailing Academy (WPNSA), which is also supported by Battens.

Ray Edwards, a Director at Battens, said: "The CST has introduced the thrill of sailing to a whole new generation who may not have otherwise had the opportunity to enjoy the sport.

"By tying our colours to its mast, we can help the CST make sailing so much more accessible and keep the Olympic legacy alive."

One of the CST's best known initiatives is the ‘Rod Shipley Sail for a Fiver' scheme which allows 2,000 school children to try sailing or windsurfing every year.

John Tweed, who is CST Chairman of Trustees and former Chief Executive Officer of WPNSA, said: "Battens' generous support has contributed towards introducing more than 16,000 young people to the water under our various programmes with a number being supported through further Royal Yachting Association qualifications.

"We also help disadvantaged young people change their lives and gain qualifications to help them into employment in the UK and abroad.

"I would like to emphasise just how grateful we are for Battens' latest contribution and its ongoing support."

Sir Ben Ainslie led the way with a gold medal as Team GB's sailing squad competed on the waters off Weymouth and Portland at the 2012 Olympics.

Battens Charitable Trust was set up in 1985 to support community initiatives, local charities and other causes, and has over the years donated more than £500,000 to support the local community.