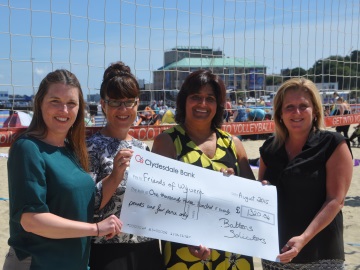 The £1,320 donation from the recent extravaganza means that the Friends of Wyvern Academy will be able to buy wheelchair accessible play equipment, including a swing and a roundabout.

Jackie Moon, chairman of the Friends of Wyvern, said: "We are only a small charity so this brilliant donation means so much to us.

"It is the most anyone has raised for us in a single event in recent years and has helped us hit our £38,000 target to buy the swing and roundabout.

"Some of our children have never been able to go on play equipment so this means they will be able to play and enjoy themselves as every child should.

"Our tremendous thanks go to all at Battens and all those who took part in the tournament or who supported it in any way."

Wyvern Academy is located on the Wey Valley campus on Dorchester Road in Weymouth.

It is purpose-built for children and young people aged 4 to 19 with complex needs, including Autistic Spectrum Disorder (ASD).

Champions GH Podiatry claimed the crown after 32 teams battled it out at this year's beach volleyball tournament at the end of July.

Visit www.wyvernacademy.co.uk/community-links/friends-of-wyvern/ for more about the school and charity.