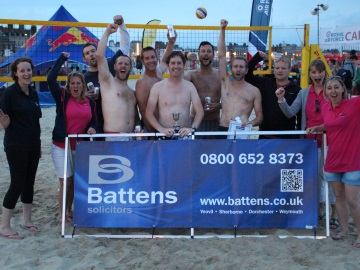 Organisers of an annual charity volleyball tournament on Weymouth beach are aiming to net £1,000 to help support Kingfisher Ward (the children’s ward) at Dorset County Hospital.

Battens Solicitors is holding the extravaganza on the evening of Thursday July 28 in aid of the Kingfisher Ward, at Dorset County Hospital. The ward provides great support to children and their families when times can be difficult.

Businesses and local organisations are now being urged to enter teams in the beach volleyball championship on the sands near Weymouth Pavilion. To enter a team, or for more information simply visit www.battens.co.uk\weymouthbeachvolleyball.

Cherise Luke-Bennett, one of the solicitors organising the competition in Battens' Weymouth office, said: “Our charity volleyball tournament is always an enjoyable evening with a carnival atmosphere.”

“Now in its tenth year, it has become a firm fixture on the local business and community calendar.”

“We’re again aiming to raise more than £1,000 for charity and are pleased to be helping the Kingfisher Ward at Dorset County Hospital this year.”

Some 32 teams from local businesses and organisations will battle it out on the sands.

There will be a bar, entertainment and food during the evening.

GH Podiatry won the 2015 contest in a close-fought final against Team NewBody when record proceeds of £1,320 were raised for the Friends of Wyvern Academy.

Classic director Pete Bennett, from Weymouth Volleyball Club, said: “We hope a good sum of money is raised once more from the charity volleyball tournament.”

“It marks the start of a super weekend of volleyball and we are pleased to have the support of RAF Careers again for 2016.”